How polluted is the air in Tirana?

From April 2018 until today in the frame of Green Lungs project financed by European Union, Milieukontakt Albania and Co-Plan have monitored the air quality in 84 different monitoring station in Tirana city. The monitoring will be extend further over the next two years covering almost the entire area within the Grand Ring of Tirana. For the monitoring it is used the equipment called Aeroqual Series 500, as an alternative monitoring of the air quality in real time. The equipment function with different sensors for gases and sensor for particles for the monitoring of PM2.5, PM10 CO, CO2, SO2, NO2, O3 and VoC.

After the first year of field monitoring, data were analyzed to identify problematic areas. The level of pollution exceeds EU and Albanian stan 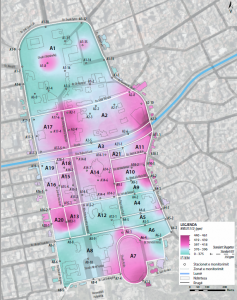 dard norms, exactly at 7 stations for PM2.5 and 84 stations for Carbon Dioxide (CO2), Nitrogen Dioxide (NO2), and Volatile Organic Components (VoC). The rest of the measured indicators (PM2.5, PM10, CO, SO2 and O3) were within European standards.

The source of pollution comes mainly from vehicle emissions where problem remains the old diesel engines. Essential contribution in the increase of the concentration of these particles in the air is provided by construction sites and reconstruction of the roads. They are one of the air pollutants that cause serious problems in human health.

In the 2019 Pollution Index (Numbeo), Tirana ranks as one of the most polluted cities in Europe. The ranking is based on citizens’ perceptions of pollution. Air and water pollution play a major role in the calculation of a city’s pollution. Albania’s capital continues to be one of Europe’s most polluted countries. The Pollution Index, the largest data portal on quality of life, showed that pollution in Tirana is higher in the first half of 2019 compared to previous period. The increase of the level of pollution in Tirana also brings a reduction in the quality of life for those living in the capital or visiting Tirana. Napoli is ranked among the sixth most polluted cities in the European Union, while Bucharest ranks 9th. Europe’s least polluted city is Helsinki, the capital of Finland, which scored just 12.4 points on the pollution index for the first six months of 2019.

Tirana’s poor performance is no longer a surprise for its citizens. Extensive construction in developed urban centers and chaotic public transport with a fleet of old buses are major reasons of heavy traffic on almost all major roads, which cause air pollution from cars and new skyscrapers that are constructed in any open green space.